Tucked away on the backside of Chinatown lies a tiny enclave of brick residential homes and a smattering of sidewalk cafes and restaurants, with a temperament that extends off the hippie vibe of Kensington market, but in a grown up way. This is Baldwin Village. For Torontonians, it’s where the infamous 2-for-1 Chinese fried lobster special from Wah Sing resides. It’s also home to a sweet gelato shop featuring Asian-flavored gelato.

I’ve been waiting all summer to have my first taste of Kekou Gelato’s house-made confections, so today I crowned “gelato day” and skipped lunch just to enjoy a double scoop of Vietnamese coffee and peanut sesame on a sugar cone.

I sampled the durian and I immediately thought squash on Thanksgiving, but then a big wave of garlic and onion flooded my tongue, not a flavor for me. The black sesame was pretty tasty, and the rum and condensed milk and whiskey green tea sounded interesting, but it was too early for the hard stuff!

As I licked my way down the sunny side of Baldwin Village, watching the sidewalk diners eat and converse in the dappled sunshine — SPLAT. No more than six happy licks later and my gelato was all down the front of me and melting into a brownish puddle on the sidewalk. I stood there with my empty sugar cone, laughed aloud and thought, it was good while it lasted! I guess the universe (most likely my pants) is trying to tell me I didn’t need a gelato today.

Kekou is a tiny small batch joint scooping out some BIG flavors, I wanted to try their gelato not just for the unique flavors, but because of the way they make their goods. Kekou omits stabilizers from their recipe which gives “traditional” gelato that soft and creamy texture, they are proud to offer a chemically processed free product. At first lick, you can sense a texture variance from a typical gelato, there is a bit of graininess, but not in a bad way. They age and pasteurize their gelato for about 10-12 hours and use real fruits and teas in their custard base. 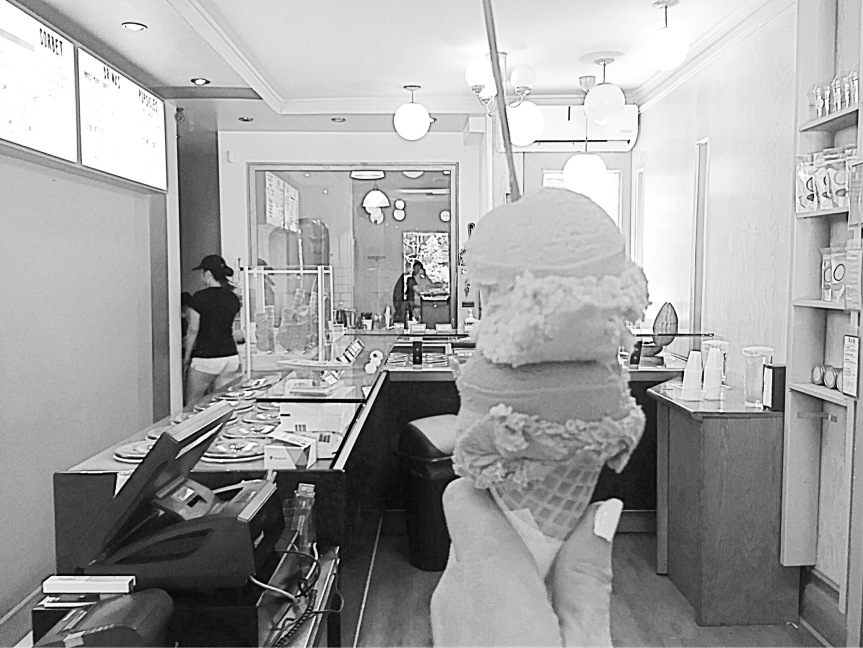 It’s a tiny space, enough to seat a few, I recommend walking around Baldwin, just don’t let that gelato fall off the cone!