DAY TEN
Our a.m. workout is becoming a routine –– after coffee of course. We still haven’t had any CRAZY intense cravings; an occasional need for wine here and there, ahem during the State of the Union address. I even expected to be in complete agony over not being able to eat cheese or bread, or even chocolate, but so far so good. I know it will hit, it’s just a matter of when… dun dun dun.

BREAKFAST: Those sweet potato chia pudding parfaits were so GOOD, we wanted to share them with Ki today, so instant replay of yesterday.
Get the recipe:

LUNCH: Beets. People either love them or hate them. I love them either pickled or roasted. Roasting beets intensifies their flavour by caramelizing the sugars and releasing their sweet goodness. A quick toss with salt, pepper and a drizzle of olive oil and boom, delicious. Here they are paired with a base of creamy cauliflower puree and garlicky greens. 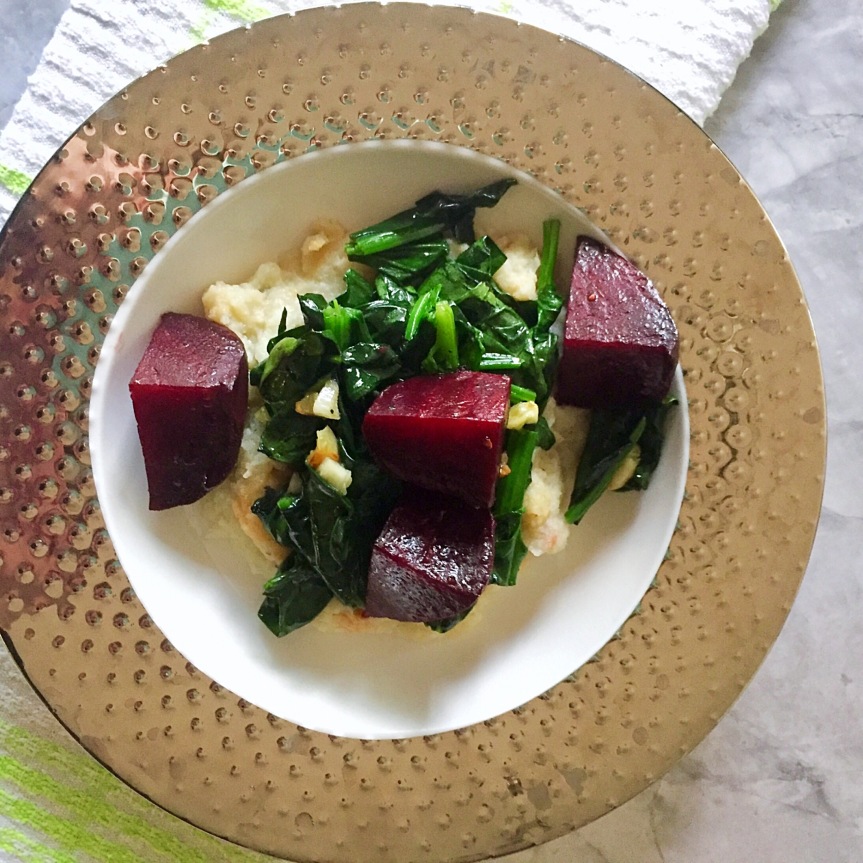 DINNER: One thing we LOVE to do on the weekend is hit up Sun’s Kitchen at the Pacific Mall for the BEST hand-pulled noodles in the GTA. Our go-to soup is their rendition of Dan Dan Noodles, it’s creamy, nutty, spicy and totally slurp-worthy. Here is my Whole30 spin, sans the noodles, of course.

Preparation:
For the Meat Mixture: Heat a skillet over medium heat add the oil and stir-fry the ground pork until no longer pink. Add the chopped King mushroom, garlic, ginger, coconut aminos and hot chili oil. Continue stir-frying until fragrant and the mushrooms have softened. Reserve in the skillet to keep warm until you are ready to top the soup.

For The Soup Base: In a bowl, combine the Soup Base: white sesame paste, soy sauce and vinegar. Whisk the mixture with a little at a time to mix thoroughly. Continue whisking until the paste becomes smooth.  Add the chopped green onion and the hot chili oil. Set aside.

For the Broth: In a stockpot, combine the chicken broth and the almond milk and heat on a low setting, you don’t want to create foam or cause separation, so simmer gently. Slowly add the soup base (from above) and
whisk until combined.

For the Spinach and Enoki Mushrooms: Add sesame oil to a pot of boiling water. Add the enoki mushroom and blanch until softened, (1 minute). Remove to a plate. Next blanch the spinach and bok choy and simmer until tender. Drain and add to the plate.

To Serve: Pour the broth into the bowls, add the enoki mushrooms, spinach and bok choy. Add the meat mixture next to the vegetables. Finally, garnish with cilantro and drizzle on the hot chili oil to taste.